Soon after the discovery of silver in Little Cottonwood Canyon in the late 1860s, prospectors crossed the mountain ridge to the south and staked more claims in American Fork Canyon. The American Fork Mining District was organized in July 1870 and the largest mine, the Miller Hill mine developed quickly and in 1871 was purchased for $120,000 by the Aspinwall Steamship Company of New York City. They built the Sultana Smelting Works at Dutchman Flat-about 4 miles above Tibble Fork Reservoir-which employed 250 to 300 men in 1871. It was one of the most costly smelters in Utah Territory. The town that grew up around the smelter was named Forest City.

The smelter's production soon outpaced the ability to transport bullion and ore out of the canyon so the Aspinwall Steamship Company organized the American Fork Railroad Company to address the problem. They planned to build a narrow gauge railway from the city of American Fork across Highland then up the canyon to Forest City, a total of 17.5 miles. The Utah Southern Railroad, which at the time terminated in Draper, was scheduled to extend through Utah Valley that year and the new railroad would join it in American Fork. Construction on the line began in May, 1872 and by August had reached into the canyon. 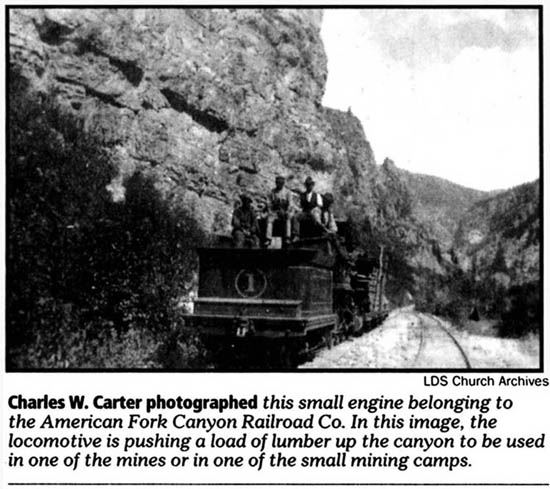 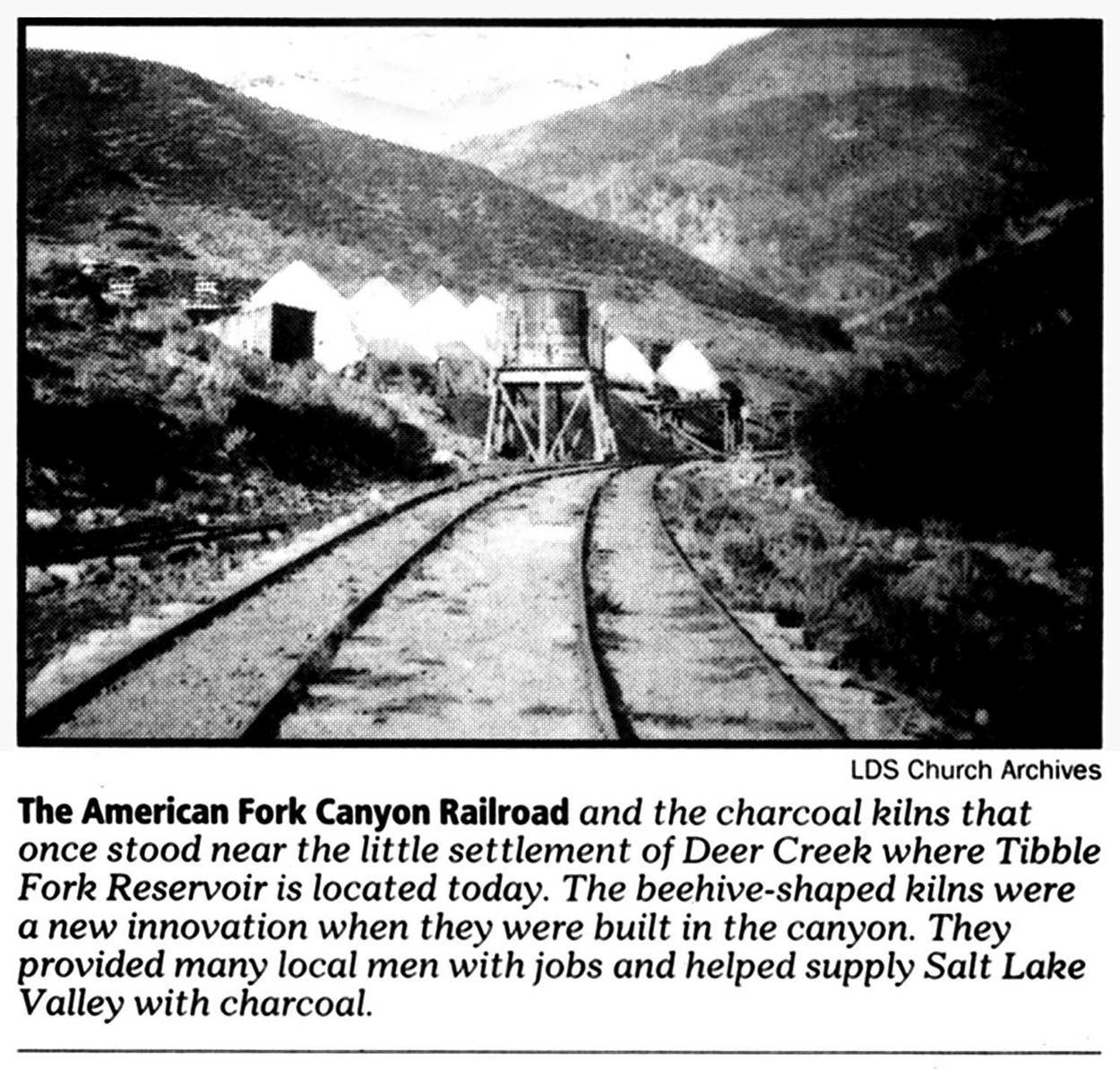 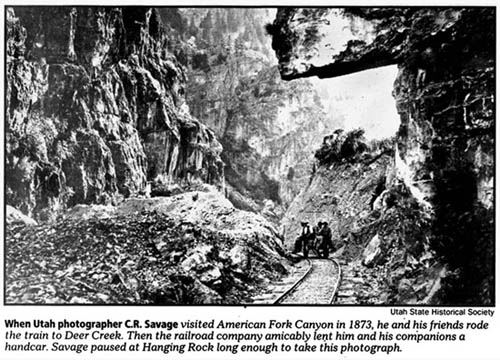 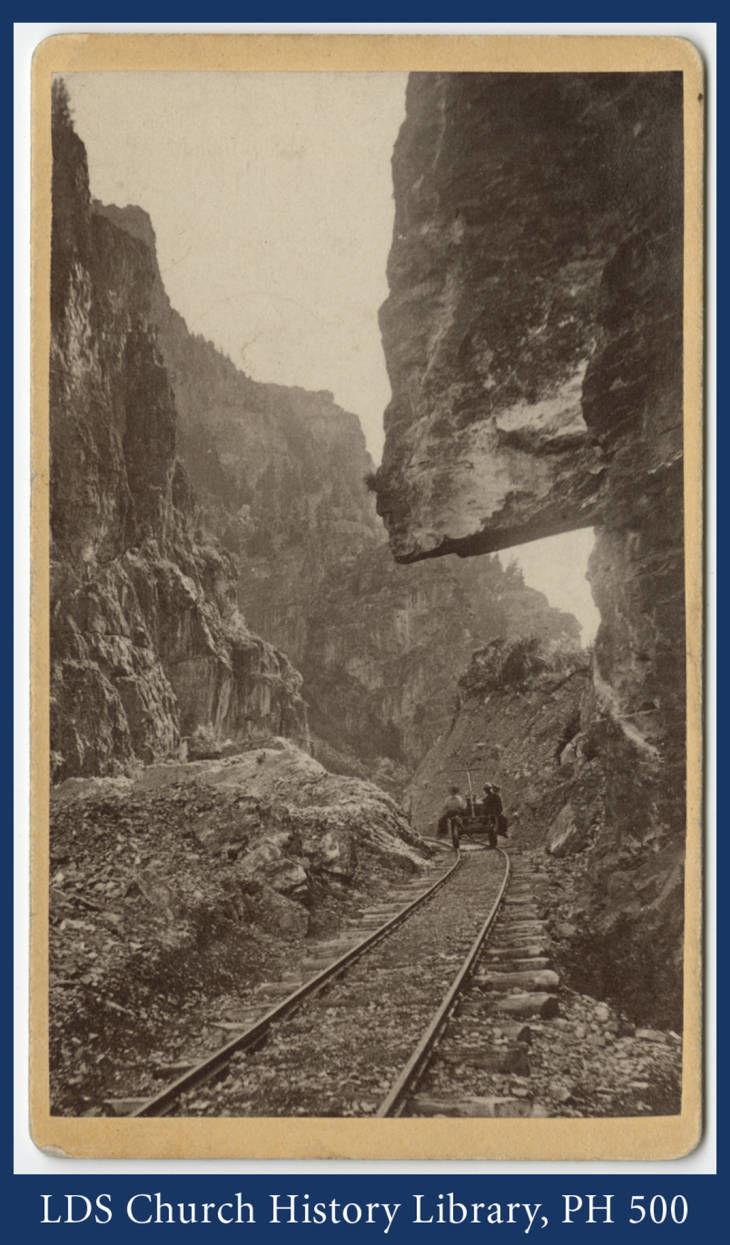 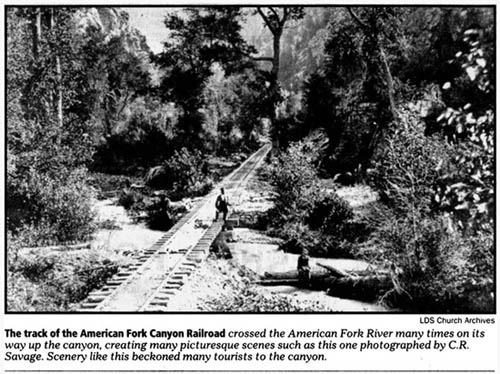 The small engine to be used on the American Fork Railroad arrived in Salt Lake City in July, 1872 but the Utah Southern had made little progress past Sandy by that time. The engine was transported to its new home by "leapfrogging" – laying three sections of temporary track, three teams of oxen then pulled the train to the end, then they pulled up two sections of the track and replaced it in front of the train. It took seven days to go from Draper to American Fork in that manner. The engine arrived in American Fork and made its first test run on August 20, 1872. The railroad was completed to the end of its route on November 26, 1872 at Deer Creek, (also called Silver Lake City) the present site of Tibble Fork Reservoir. 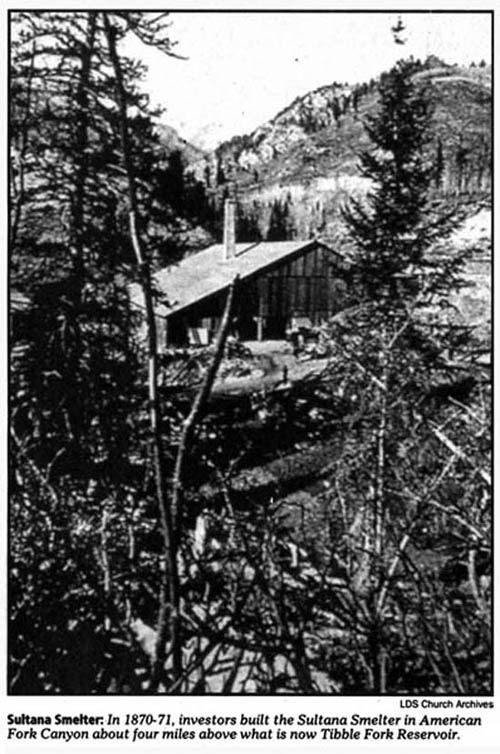 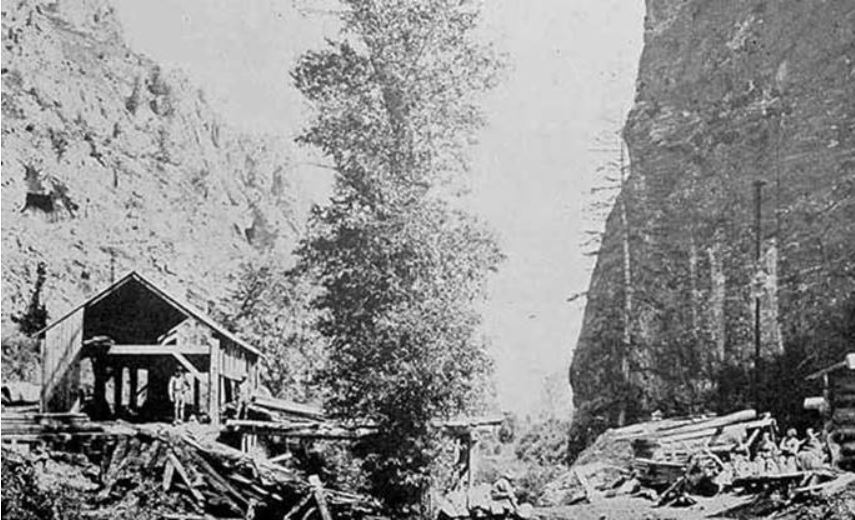 The route had been graded all the way to the Sultana Smelter but, unfortunately, the final 4 miles to Forest City were judged too steep for the train to climb. Bullion was brought down from the smelter in wagons and loaded onto the train cars at Deer Creek. The cars were then allowed to coast down the steepest part of the track to the waiting locomotive.

In late 1872, severe winter weather forced operations in American Fork Canyon to shut down for the season. That winter a diphtheria epidemic swept the town, killing a number of people including eleven children. The dead were buried in a small cemetery nearby, which became known as Graveyard Flat. The population of Forest City at that time was estimated at 500 but later grew to an estimated 2000 to 3000. There were enough children that a school was established. A dairy farm supplied the town with milk and butter. There was a sawmill, two general stores, hotels, Post Office, stage coach line, houses and a successful saloon. Fifteen kilns produced charcoal for the smelter, with another ten kilns at Deer Creek.

In early 1873, railroad officials decided their small engine was too light for the steep railway and mules took over pulling the train until a new, larger engine arrived in the autumn. Canyon industries were not developing as rapidly as expected and plans to extend the railroad to Forest City were abandoned for good.

In the years 1874-1876 the American Fork Canyon mines began to peter out. The higher-grade ore bodies were being exhausted. Prospecting further up the canyon led to the discovery of other good veins, but the country was rugged and development slow. In order to cover expenses the railroad began taking tourist groups up the canyon on sightseeing trips. 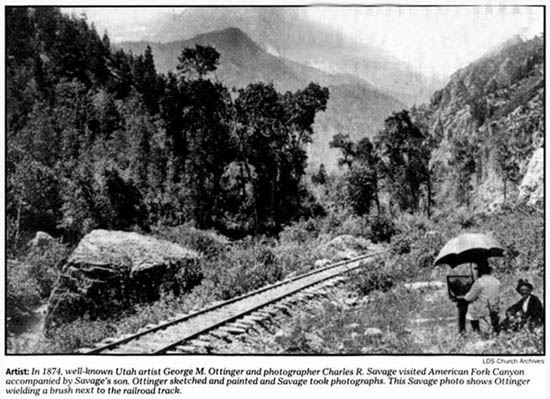 The Miller Hill Mine stopped producing ore by 1874, started up again briefly the next year, then was shut down permanently. The Sultana Smelter was dismantled in 1876 and Forest City was in serious decline. The canyon's other mines were not rich enough to keep the railroad profitable. In June 1878 the American Fork Railroad became the first Utah railroad to fail. Forest City was deserted by 1880 and today little evidence of its existence remains. 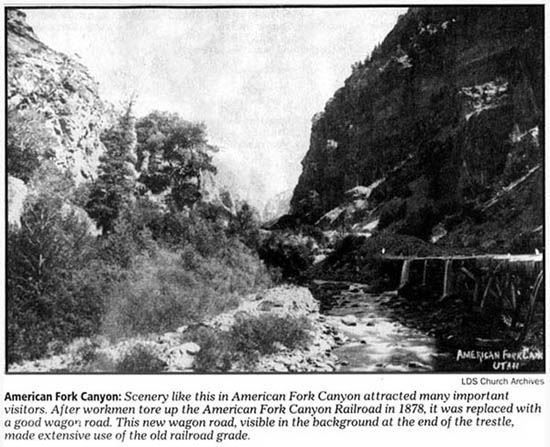 Three other settlements of note were built - Mineral Flat, Deer Creek and Tyng's Camp but none were ever very large. Deer Creek (Tibble Fork) had about 500 people at one time, with hotels, saloons, stores and homes built there. Over $30 million worth of ore (gold, silver, copper, lead and zinc) was taken out of more than fifty mines by 1940, when mining activity ended.  I have identified almost 60 different mines that were opened in the canyon at one time or another.

In spite of all that activity, the mining industry has almost no mention in any of the histories of Highland. The oldest Poole son was killed in an avalanche in 1881 while working at the Pittsburgh mine, and in the 1880 census 3 men were recorded as "farmers and miners". Two of them, John Hegan and Ed Winn, were likely partners in a mining operation-the third one was William Householder.