She was a Sunday School teacher in 1923 and the family memberships were received in 1922 but there are no other references. Edward was born May 6, 1886 or 87, in Albany, New York to Edward and Georgina M. Jones Ferguson. Ann was born May 20, 1892, in Farmington, Utah to Richard and Sarah Winter Withers. They were married April 2, 1913, in Salt Lake City and had three children: Edward Withers, Maxine Sarah, and Elsa Withers. In 1920 they lived in Salt Lake City, in 1930 in Willard, Utah and in 1940 in San Bernardino, California, where Ann died August 2, 1948, and she is buried in Montecito Memorial Park. 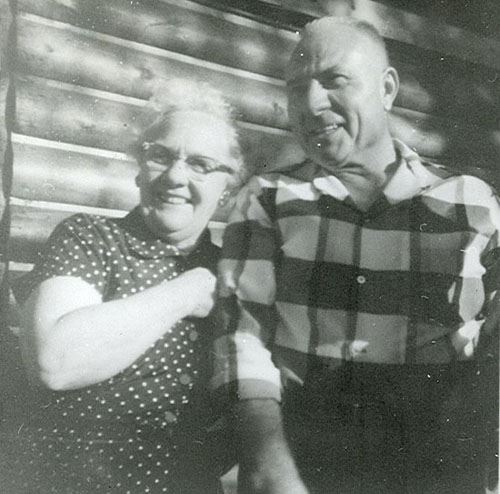 Vern, as he was known, was born May 16, 1898, in Provo, Utah to William Will and Lillie May Richmond Ferguson. Eloise was born March 12, 1899, in Salt Lake City to James Ernest and Amy Lorancy Hicks Coult. They lived in Salt Lake county until 1940 when they moved to Highland where he was supervisor of the Lower Power Plant in American Fork Canyon (Number 69 on the 1958 Highland map).

They were parents of six children: Elvernon Jr., Althea, DuWayne, Eugene, James, and Don Wesley. DuWayne and James died as infants and Eugene drowned in Utah lake at age twenty one.

Eloise was a dedicated Relief Society, Primary and YWMIA worker and Vern worked with the scouts and was an active High Priest in the Highland Ward.

The power plant closed in 1959, so they moved to the Olmstead plant at the mouth of Provo Canyon, where Vern worked for four more years. On October 3, 1963, he submitted his retirement papers and died that same day. Eloise died May 5, 1972, in American Fork.