Richard (Richie) and Mary Elizabeth Jenkins Harkness (1892):  Richie was first mentioned June 26, 1892, when he was sustained as Sunday School Second assistant to Samuel Eastman with James J. Bolin as the First Assistant.  He was born May 22, 1850, in Sharon, York County, South Carolina to Davis Harkness.  He was baptized into the Church of Jesus Christ of Latter-day Saints on January 6, 1885, by a missionary, Joseph Willey.  There was a great deal of persecution in the area and he was beaten severely and told to leave, so he escaped to North Carolina, then to Alabama, then to Salt Lake where he arrived in 1890. 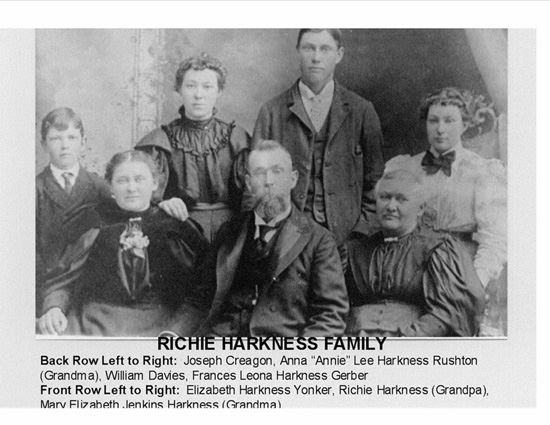 Mary was born April 11, 1845, in Sharon, York County, S.C. to Joseph Miller and Anne Mauney Jenkins.   According to the 1900 census they were married in 1872 and other records show they were married November 17, 1891, in Manti, Utah so I assume that was a temple sealing.  They had five children:  Mary Elizabeth, Frances Leona, William Davies, Margaret Annie Lee and Joseph Cragan.  Their oldest child was born in 1867, five years before their marriage.

On June 26, 1893, Highland was granted a voting precinct and Richey was appointed Justice of the Peace.  On August 13, 1893, he was one of three whose names were presented to the authorities to be the Branch President.  Hyrum Healey was chosen and Richey was set apart as a teacher at that same time.   On February 5, 1898, he left to serve a mission to the Southern States, where he had been so severely persecuted ten years before.