Allen and his two brothers, William Leo and Vern Henson (q.v.) all lived in Highland - William in 1920 and Vern in 1930 at the same time as Allen. Allen was born September 24, 1895, in American Fork, Utah Territory to Niels Andreas and Elizabeth Jane Smith Larson. Nancy was born May 12, 1895, in Fredonia, Arizona to Isaac David and Rebecca Rosetta Cooper. She married William Raymond Hain June 18, 1913, and that marriage apparently ended in divorce as she married Allen June 1, 1918, in Iona, Idaho.

They had three children: Thelma, Virginia Ruth, and Myrle E Nancy died December 1, 1960, in Ogden, Utah and Allen died December 21, 1974, in Heber City, Utah and they are buried in the Pleasant Grove City Cemetery. 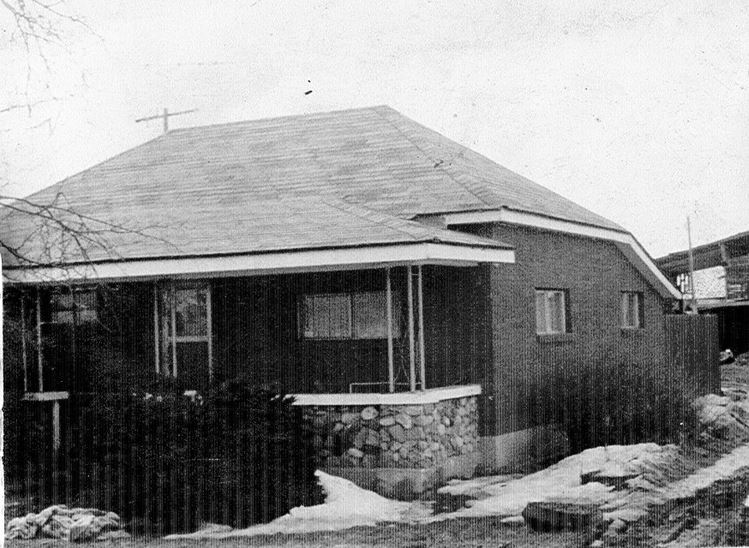 Ludvig was born April 25, 1890, in Hoja, Christianstads Lan, Sweden to Lars and Elice Bengtson Pearson and was baptized into the Lutheran Church the next day. There was no father in the home and his mother worked in a rubber factory in Helsingborge and he stayed with various people until he was six, when he started school. It was a Lutheran School and most of their lessons were memorized, including part of the Old Testament. When he was a bit older he lived with his mother and attended school in winter and spent most of the summer at the ocean.

His mother converted to the Church of Jesus Christ of Latter-day Saints and he learned English from the missionaries in preparation to immigrate. His mother wanted him to go to America before he was twelve so she wouldn't have to pay full fare for him so she found a place for him to live with Louis Dorius in Ephraim, Utah. He was baptized June 13, 1900, in the waters between Helsingborge and Denmark by John H Anderson, a missionary, and he soon sailed to America.

In Ephraim he learned much about farming, horses, sheep and other animals and tools that helped him for his life. In school he had a sympathetic teacher who spent a lot of time teaching him how to read. When his mother finally arrived he had a difficult time communicating with her as he had forgotten how to speak Swedish, but they moved to Salt Lake where she found other Scandinavian immigrants. She supported them by doing washing and house cleaning for well-do-to people. They soon moved to American Fork where she kept house for John H Anderson who she had known in Sweden-and who had baptized Ludwig. He went to school through the sixth grade.

He worked at various jobs-mostly farming-but also at the Sugar Factory and for American Fork City, installing their first water system then at a mine in American Fork Canyon. Later he worked for Chipman's at the Star Flour Mill assisting the miller, Earl Greenwood. 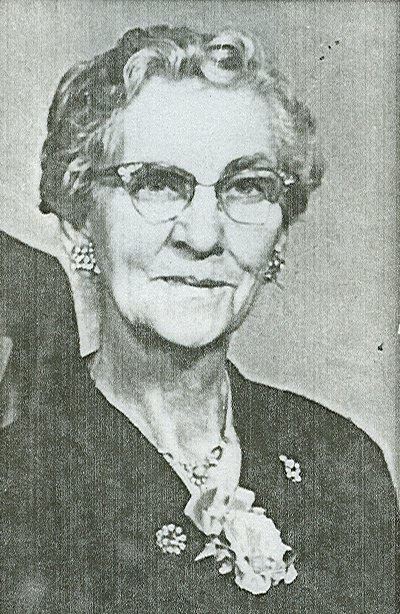 Vera was born February 13, 1891, in American Fork, Utah Territory to Thomas Jr. and Mary Nevada Boley Featherstone, a sister to Mark Featherstone (q.v.).  She was the oldest of six children, two of whom died very young. She went to local schools and graduated from American Fork High where she was a very good scholar, especially in spelling, English, literature, geography and history. When Ludvig and his mother moved to American Fork in 1907, they moved next door to Vera. Ludvig was shy and Vera was very sympathetic to him getting used to the customs and language. Three years later, after Ludvig began to notice girls, they were married in the Salt Lake Temple February 16, 1910.

They first made their home in American Fork while Ludvig worked at the flour mill. After the birth of their first son he was called to serve a mission to Sweden and was gone for 2 ½ years. Upon his return he continued working at the mill and they raised some pigs and other animals. They sold the pigs to Harvey Speer in Highland and he told them he had thirty acres he wanted to sell so they used the pig money as a down payment and bought it (Number 4 on the 1958 Highland map). There was no home on it but in a couple of years, after living in an adobe house, they bought a home and moved it onto their property, adding on and modernizing many times over the years. They raised hay, grain, peas, sugar beets and cucumbers. There they raised their seven children: Maurice, Harold, Marie, Lurene, Merlin, Virginia, and J. T. They eventually had a Grade A Dairy and one of the first corn silage silos in Highland. 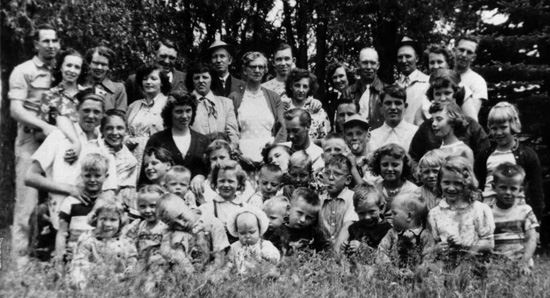 After making and using a carbide lighting system for their home and outbuildings, Ludvig was very instrumental in getting Utah Power and Light to provide electricity to Highland beginning in 1928. They only agreed to if the people would pay $100 and also buy an electric stove so Ludvig spent many hours convincing his neighbors that it would be a good thing. He also was prominent in the 1957 - 59 installation of culinary water in Highland and was on the board of directors, as well as meter-reader.

They were always active in church - Ludvig served in Sunday School, Priesthood Quorums, Bishopric, Stake High Council and genealogy work. Vera was Relief Society President during the depression for three years, 1930 - 33 with Jane Roundy and Jessie Adamson as counselors and Cressie Greenland as secretary, then Velma Jerling as counselor, served in all the organizations and served on the Old Folks committee for many years. Vera had a beautiful singing voice and sang many solos and duets and was in the ward choir for many years. After WWII their grandson, Thomas L. Dimick, came to live with them and was raised as their son. He was about the same age as Merlin's son, Michael and he got along well with the boys in the ward. Sometimes his sister, Jeannine, came to live with them also. 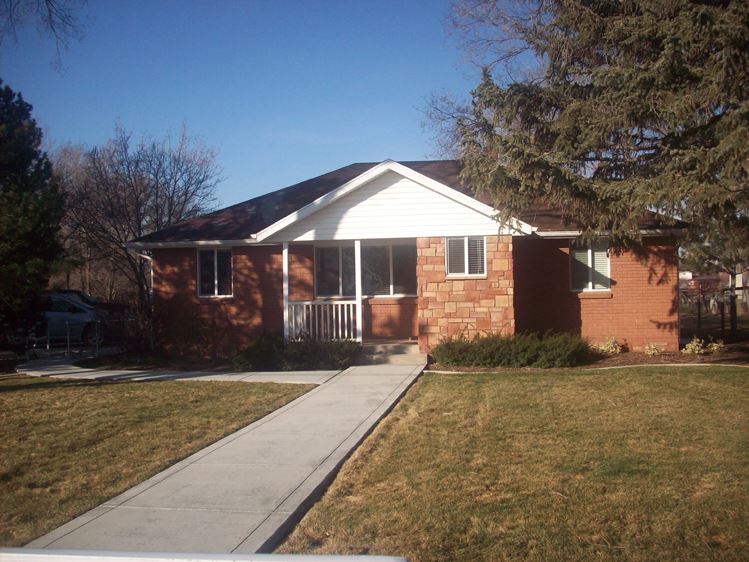 In 1958 they decided to sell the farm and build a new home close to the church (Number 86 on the 1958 Highland map). About ten months after the Highland Stake was organized Ludvig was called to be its first Patriarch in March, 1964, by Thomas S Monson who had recently been called to the Twelve. He served in that calling until January, 1968, and he passed away March 7, 1968. Vera died November 12, 1973, and they are buried in the American Fork Cemetery. 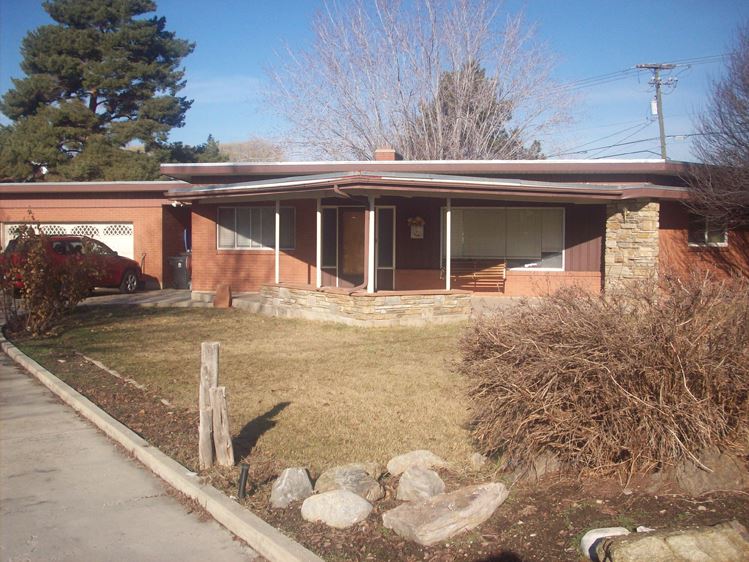 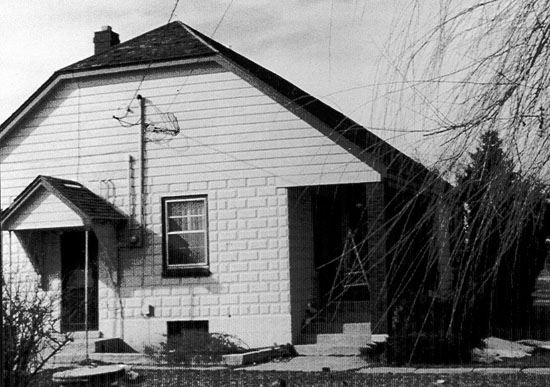 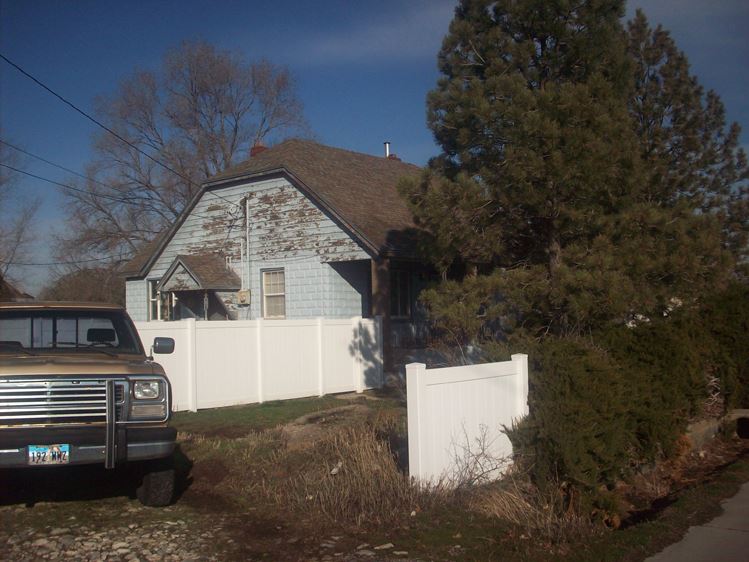 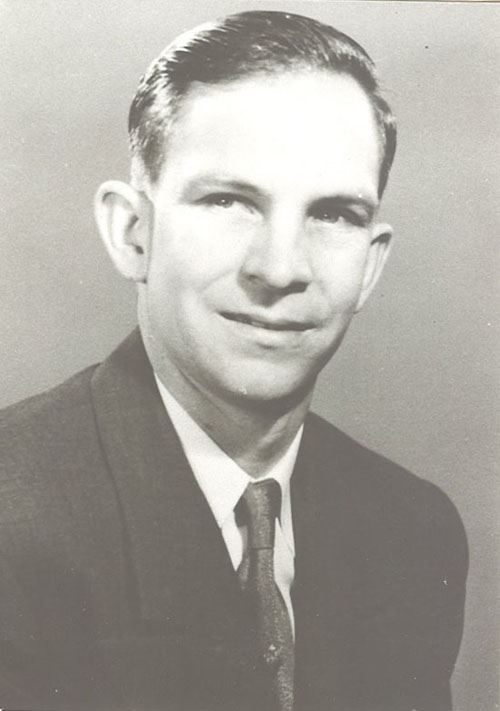 The sixth Bishop of the Highland Ward was a born-and-raised, home-grown Highlander. Merlin was born September 3, 1923, to Ludvig and Vera Larson (q.v.) and lived here until 1994, except for a few months. He was schooled at Harrington Elementary and American Fork High School, graduating in 1941. He worked for his father on the farm, at a pea vinery, a bean vinery and at the Sugar Factory in West Jordan, then later at Geneva Steel from 1951 to 1986.

Marie was born July 1, 1925, in Richfield, Utah to Milo LaMarch and Nettie Curtis Busk, a sister to Grant Busk (q.v.). Just after her second birthday her father drowned in a boating accident on Fish Lake. She attended Richfield schools until ninth grade, when they moved to Highland. She attended American Fork High School and was a baton twirler for the band. She became acquainted with Merlin in Highland and they were married August 18, 1943, in the Salt Lake Temple. They rented their first home from Elisha Peck in Lehi for about six months, then moved in with his parents for about a year while building a basement home they moved into in 1945 (Number 94 on the 1958 Highland map). They completed the home in 1948, then in 1961 they built a new home on their property (Number 93). 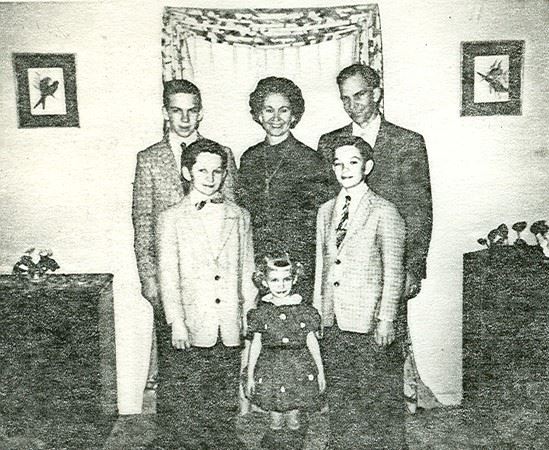 They had four children: Michael, Jerry, Farrell and Karen. They were always active in the Church - Merlin was in the Sunday School Superintendency with Wayne Day and Dave Strasburg, Secretary of the Elder's Quorum for presidents Henry Greenland and Seth Larsen, then counselor in the Elder's Quorum to Donald LeBaron. On June 20, 1953, he was ordained Bishop by Marion G. Romney, with counselors Donald LeBaron and Glen Strasburg. Shortly thereafter Donald was released and Ellsworth Hardy took his place and in 1959 Ellsworth moved and Perry Jepperson was sustained in his place. He served as bishop for 13 ½ years, until November, 1966, then on the High Council for seven years, until 1973, then as Alpine Stake President for seven years, then on August 10, 1980, he was released from that position and sustained as the first President of the newly created Highland Stake, where he served until April 10, 1983. While serving as stake president he and Marie hosted many General Authorities in their home including Ezra Taft Benson, Mark E Peterson, Neal A. Maxwell and Victor L. Brown, among others.

After retirement he and Marie did a bit of traveling and enjoyed family gatherings at Fish Lake and he served on the Highland City Planning Committee. The enjoyment of his retirement ended on October 24, 1991, when, after 48 years of marriage, Marie died of pancreatitis. Merlin felt very alone after that until in 1993 when Dianne Sayre wrote to him saying she had just learned of Marie's death. Dianne was a former resident of Highland, a divorcee (she had been married to the infamous Ron Lafferty), now living in Tucson, Arizona. They corresponded and visited and were married December 3, 1994, in the Las Vegas Temple. They spent quite a bit of time traveling and visiting areas they hadn't seen before. Merlin died July 31, 2013, and was buried next to Marie in the American Fork City Cemetery. There is a small park in Highland, near to Merlin's home, named the Merlin B. Larson Memorial Park. He was the instigator of creating the park while on the City Planning Committee and they surprised him by naming it after him.

Vern was a brother to William Leo and Allen K. Larson (q.v.) who also lived in Highland. Vern was here for the 1930 census, along with Allen, but Leo had been here in 1920 and left before 1930. Vern was born February 5, 1885, in American Fork, Utah Territory to Niels Andreas and Elizabeth Jane Smith Larson. Lydia was born July 31, 1884, in American Fork to William and Catherine Matilda Armstrong Chadwick. They were married in 1905 and had three children: Vivian Lydia, Rella, and Donald Stanford. They lived in American Fork in 1900, 1910 and 1920.

Lydia died February 19, 1943, in American Fork and Vern died April 19, 1946, as result of an auto accident. They are buried in the American Fork City Cemetery. 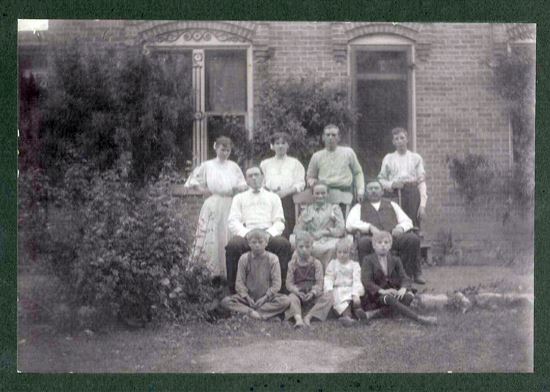