James was born September 13, 1846, in Mt. Pisgah, Iowa to John and Christine Stoker McDaniel. Lavina (LaVina) was born April 20, 1856, in West Jordan, Utah to Llewellyn and Catherine Watkins Mantle. James crossed the plains in 1852 and settled in Alpine. He was brother-in-law to Orrin Porter Rockwell, bodyguard to Joseph Smith and Brigham Young. The 1870 census shows him living with William Brown.

The couple was married June 29, 1874, and they had at least nine children: Alzina, Eva, A.J. (or H.J.), David J, Thomas R, Catharine S, Anna M, Feramorz and Elmer. His homestead patent was issued in August of 1883 for 80 acres on the north border of Highland, adjacent to Stephen Myers and William T. Brown. Within a few months his family left the area to settle in the Little Colorado Valley of Arizona. The 1900 census shows them living in Greer, Arizona and they later moved to Blanco then to Bloomfield, New Mexico where Lavina died January 28, 1944, and James died January 19, 1947, shortly after his 100th birthday. They are buried in the Kirtland-Fruitland Cemetery in New Mexico. 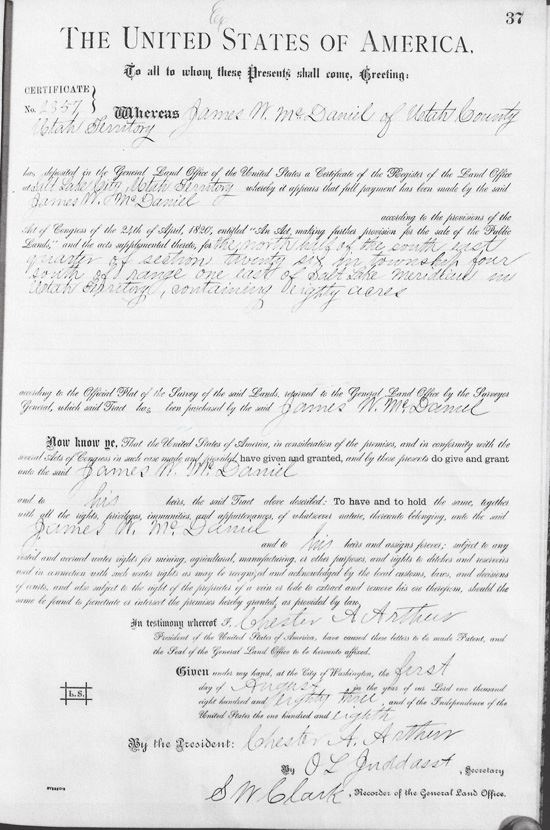 Previous: May
Next: McLachlan
Index