James was born May 27, 1823, in Ledbury, Herefordshire, England to Francis and Martha Embry Pulley. He was baptized into the Church of Jesus Christ of Latter-day Saints in 1840 and migrated to America, settling in Nauvoo in 1844. He was endowed in the Nauvoo Temple February 6, 1846. He was personally acquainted with Joseph Smith.

James married Alice Moon on the same day the saints were forced to leave Nauvoo, moving to Alton, IL (just north of St. Louis) where they lived for several years. Little is known of Alice. They had four children when they migrated from Council Bluffs, IA in 1856. Living in Salt Lake City, he was a bodyguard to Brigham Young from 1856 - 1858. They then moved to Payson, then back to Salt Lake, then Farmington and in 1864 to American Fork. When public land became available in 1869 he purchased 50 acres of land south of American Fork. When Brigham Young visited the area James asked his advice on buying land and was told that higher ground would be of more value so he homesteaded 160 acres in Highland (east of Number 98 on the 1958 Highland map), the southeast quarter of sec 1, in the name of his son, James Franklin Pullen. On May 11, 1874, James took a plural wife, Lydia Esther Hall, who was 31 years younger than he. Alice died in 1877 and the 1880 census shows James living with Lydia and their 3 children. Lydia was born April 28, 1854, to David and Jane Duett Hall. They eventually had 13 children and by 1900 were living in American Fork. They later changed (or perhaps, corrected) their name to Pulley but no reason is given for the difference. James died December 14, 1906, in American Fork, Lydia died January 6, 1935, and they are buried in the American Fork City Cemetery. 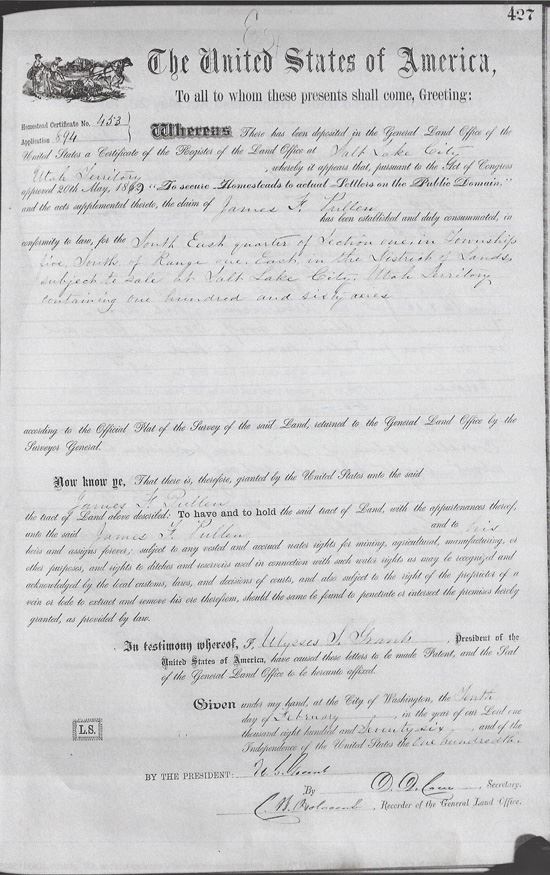 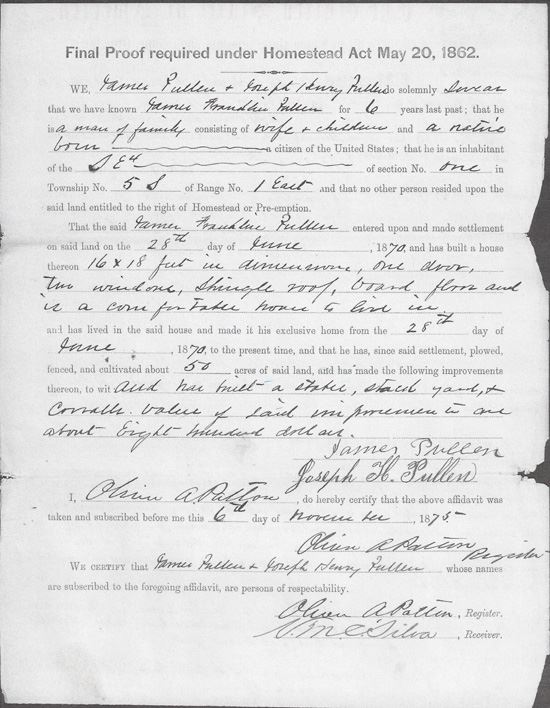 James came to Highland with his father James Pulley (q.v.) in the 1870's and returned in 1930 after his family was raised and his wife had died. He was born May 5, 1848, in Alton, Illinois to James and Alice Jane Moon Pulley. When he was just eighteen he served in the Black Hawk War from August 16 to October 24, 1866. He married Sarah March 15, 1875, and they had five children: Ophelia, Leonidas, Edith, Louella, and Armond.

Sarah was born January 25, 1848, in Savannah, Missouri to Joseph and Anna Amanda Chadney Pulley (correct-her maiden name was Pulley). She died August 28, 1927. In Highland in 1930, James was living with three of his children: Leonidas, Armond, and Ophelia, who had married Walter Gordon but he was not with her on the census. James died January 31, 1933, in American Fork and is buried in the American Fork City Cemetery.