Gertrude was born February 16, 1890, in Farmington, Utah Territory, to Charles W and Hattie Adele Leonard Earl. She learned to play the piano and organ and accompanied her dad, who played fiddle for most of the dances and activities in the Fielding Ward. She later formed a five piece band and they traveled around northern Utah playing for dances at all the churches.

She married Ariel Wilford Hansen on February 7, 1912. Ariel was born in Manassa, Colorado August 7, 1890, to Willard Snow and Annie Christensen Hansen. He was a representative in the Utah State Legislature and he owned a sheep ranch in Fielding. They had six children: Alta, Ariel Earl, Adele, June, Charles Farrel, and Dolores. Shortly after being called to be a counselor in the bishopric, he died of appendicitis on January 23, 1928. 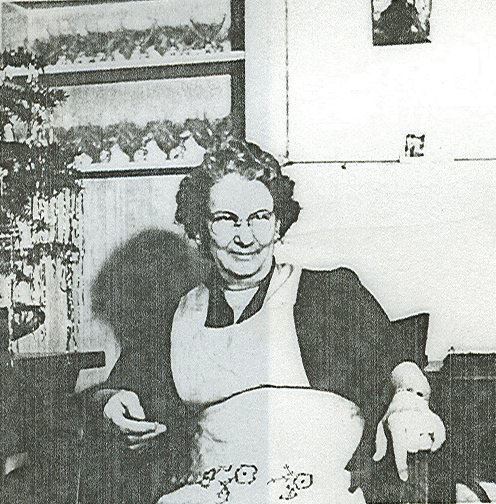 Gertrude kept busy with her small farm with apple trees, raspberries, a large garden, cows, pigs, chickens and sheep. Her father helped her as much as he could but he was old so most of the work was up to her.

On June 4, 1937, after being a widow for nine years, she and Alma West were married. He worked for Utah Power and Light at the Cutler Plant about five miles from Fielding so they moved there. Soon he was transferred to the American Fork Canyon Power Plant so they moved to Highland around 1940 (Number 70 on the 1958 Highland map).

People they met told them not to attend Highland Ward as they would not like the people there, but they attended anyway and grew to love the people. In 1943 Gertrude was called as the Relief Society President and she chose Kate Rogers and Esma Strasburg as her counselors. They served together in that capacity for almost four years. The Wests had great times in Highland and were acquainted with Becks, Adamsons, Greenlands, Halls, Larsons and many others. They remembered playing ball on the corner across from Johnny Greenland's store - where the Golf Course is now.

Gertrude's son Charles Farrel, served in the Sunday School Superintendency in 1940 - 41 and her daughter, Delores was a Sunday School teacher in 1939 - 43, beginning when she was 13 or 14.

On November 10, 1946, Gertrude came home from a stake meeting and found that Alma had died of a heart attack. Gertrude soon moved to California to make a home for her son Farrel who had not yet married. She lived in the Hollywood Ward and one of the ward members was Paul H. Dunn, who was Farrel's Stake Mission companion for a time. She was able to take a trip to Alaska to visit her daughter before her death on October 7, 1971. She is buried in Logan City Cemetery with her first husband, Ariel Hansen.

They lived at the power plant (Number 69 on the 1958 Highland map) where he was a plant operator for Utah Power and Light. Chauncey was born September 21, 1875, in Brigham City, Utah to Chauncey Walker Jr. and Sylvia Snow West. His grandfather, Chauncey Walker West, was among the 1847 pioneers who helped explore the southern part of Utah and is listed in "Utah Pioneers and Prominent Men."

Marcia was born in Illinois in 1886 and she married Chauncey in 1908. In 1910 they were living in Silverton, Salt Lake County, which was a site of a Utah Power and Light operation employing approximately eighty people. In 1918, when he registered for the WWI draft, he was living in Highland, working at the power plant, where he was also in the 1920 census. In 1930 he was living in East Mill Creek, Utah and was divorced. He died May 14, 1933, in Salt Lake City and is buried in the Brigham City Cemetery.

In 1918, when John registered for the draft, they were living in Highland and were there for the 1920 census when they were shown living between Pete Adamson and William Walker.   They had six children: Thomas Henry, John, Edward James, Naomi, Vernile William and Leroy.  Leroy was born May 14, 1923, just a few months before his father died on October 23.  He died of pneumonia caused by broken ribs suffered in a fall from a ladder.  By that time they had moved to Sandy and Ethel remained in the Salt Lake area for almost sixty years, raising the six children by herself, supporting the family by cleaning houses and being a private nurse practitioner.  She passed away March 30, 1983.  They are buried in the Salt Lake City Cemetery.

In 1930 they were in Ogden and in 1935 and 1940 they were in Highland (Number 69) where John worked at the power plant. Their Church membership records didn't arrive until 1937. They had three children: John W, Mildred, and Alma Ray. John died February 8, 1941, in Ogden and in September, 1946, Stella married Ervin William Makin. She died March 4, 1949, in Salt Lake City. John and Stella are buried in the Bluffdale City Cemetery.

LaRae died February 26, 1993 and Richard subsequentially married Helen Obendord.  He died September 9, 2005 and he and LaRae are buried in the Salmon, Idaho City Cemetery.