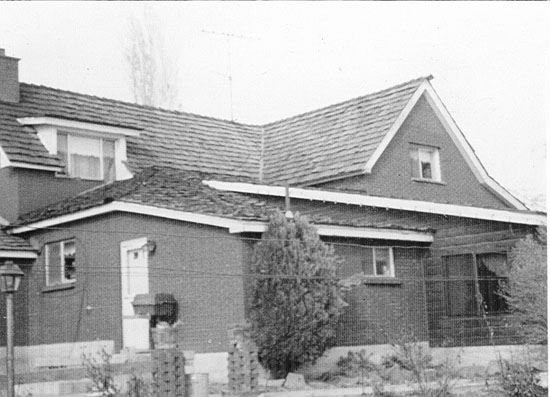 The Sweat family moved to Highland (Number 33 on the 1958 Highland map) in 1959. Ralph was born April 12, 1927, to Samuel Sweat and Bessie Muir. He lived in Salt Lake City in 1930, 1940 and 1945 when he enlisted in the service on July 14. He served until November 17, 1946, during which time he married Helga on April 20, 1946. Helga was born February 4, 1927, in Bielefeld, Germany and came to America in her third year. Her parents were Karl William and Anna "Bertha" Esche Axman. She was living in Salt Lake City in the 1940 census. In her early years she helped her parents manage a large apartment building and worked at Utah Woolen Mills when she was sixteen. Later in life she co-owned Bri-Lee Country Store and worked in the Manti Temple.

They had eleven children: Brian, Karen, Susan, Becky, Janet, Lorie, David, Duane, Merri, Donna, and Jason. I am unable to determine when they moved from Highland. One of their daughters married a local boy - Richard Chidester. Ralph and Helga were active in the Church of Jesus Christ of Latter-day Saints - Ralph served in the Elder's Quorum and Helga in the Relief Society. They apparently divorced later in life - Helga's obituary makes no mention of Ralph or their marriage. She died June 29, 2016, in Salt Lake City. Ralph married Margene Madsen on May 20, 1981, in Salt Lake City. She was born about 1933. He is apparently still living in 2018.