In order to maintain the current level of Fire and EMS protection and to recruit and retain quality Police Officers, Highland's budget for Lone Peak Public Safety Department increased by $701,000 for Fiscal Year 2019-2020. On Tuesday, June 18, after a number of open houses, research, and discussion, the City Council voted to add an $11.50 per month Public Safety Fee to all households served by Highland utilities beginning July 1, 2019. This is expected to generate $641,000 per year that will be dedicated to public safety funding. The remaining $60,000 will be taken out of City reserves. This fee will sunset in 2028 when all of Highland City's bonds will be paid off. You can learn more about what led up to this decision below or by calling City Administrator, Erin Wells, at 801-772-4566.

To see a 3 minute video on this topic, please visit our YouTube Channel.

View the presentations given during the June 18 City Council Meeting (PDF) and the Public Safety Funding Open Houses (PDF). 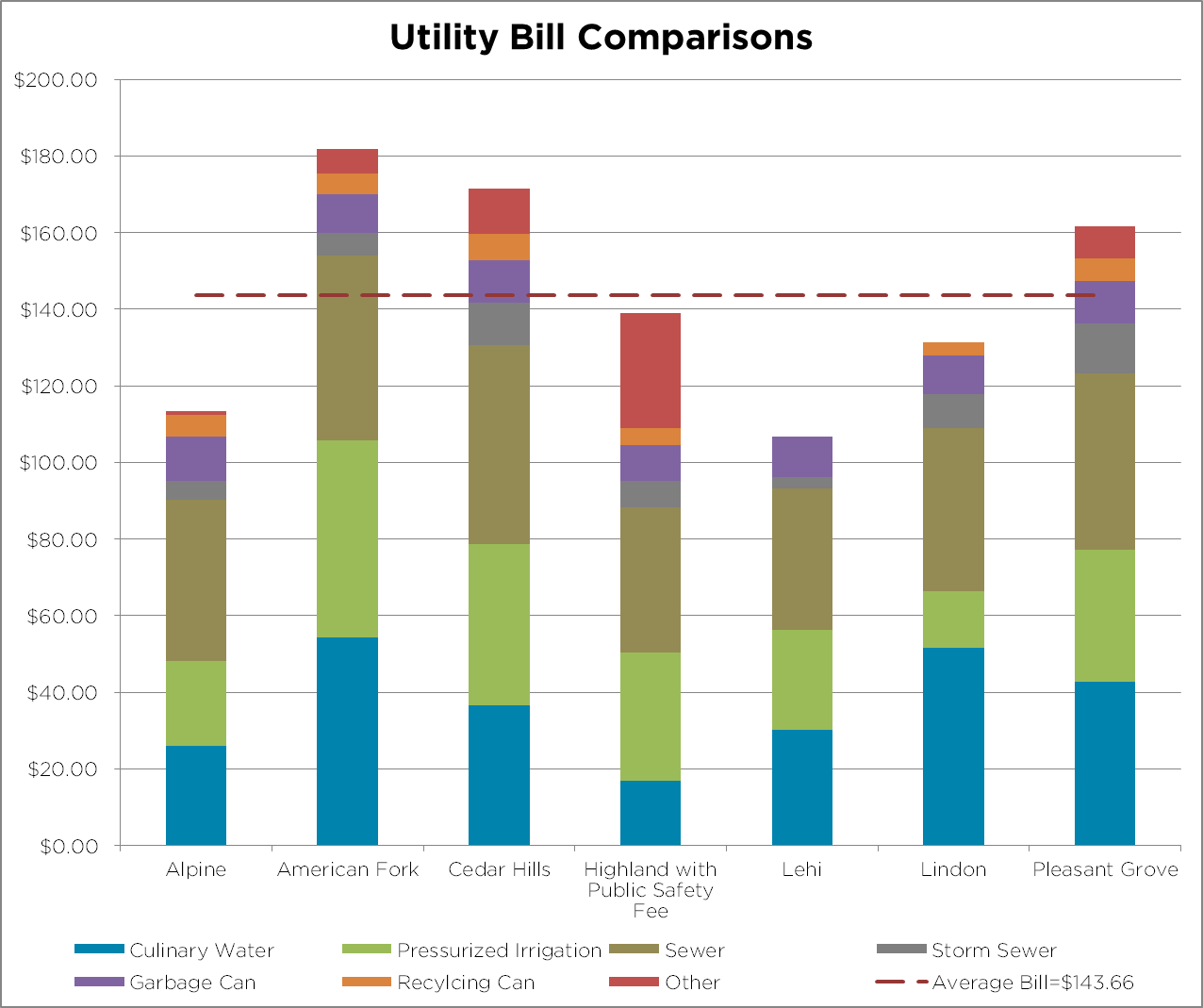 What is the increase for?

As of July 1, 2019, Cedar Hills City opted out of Lone Peak Fire District. While the overall budget for the Fire District has decreased, in order to maintain the same level of fire/paramedic service that we currently have, this opt-out means the cost for the individual cities is increasing. While some variable costs were able to be reduced, fixed ones are not changing. In addition, not only is the District losing revenue from Cedar Hills City, but also the revenue generated by ambulance transports out of that City.

The level of service that the Fire Department will provide means that Lone Peak Fire will be able to treat two medical patients on incidents such as a traffic accident, or treat a major medical incident such as a cardiac arrest without needing to rely on calling in mutual aid from American Fork or Lehi which are 8 to 15 minutes away. For periods of unusual demand, structure fires, wild-land fires, and larger incidents we still will need to rely on aid from neighboring agencies. Doing something less would mean a decrease from the current level of service which could translate into things like longer response times or not having the right number of personnel there for a medical emergency. This level of service does not meet national standards, but rather is a realistic approach to our area's call volume level and general nature of the community. See a table comparing other level of service considerations (PDF) here.

For more information, see the Fire District's proposal presentation (PDF) given to the Lone Peak Public Safety Board and their Final Budget (PDF). This funding level would put the Department at about average in spending per resident in comparing neighboring Fire Departments. See the following chart. 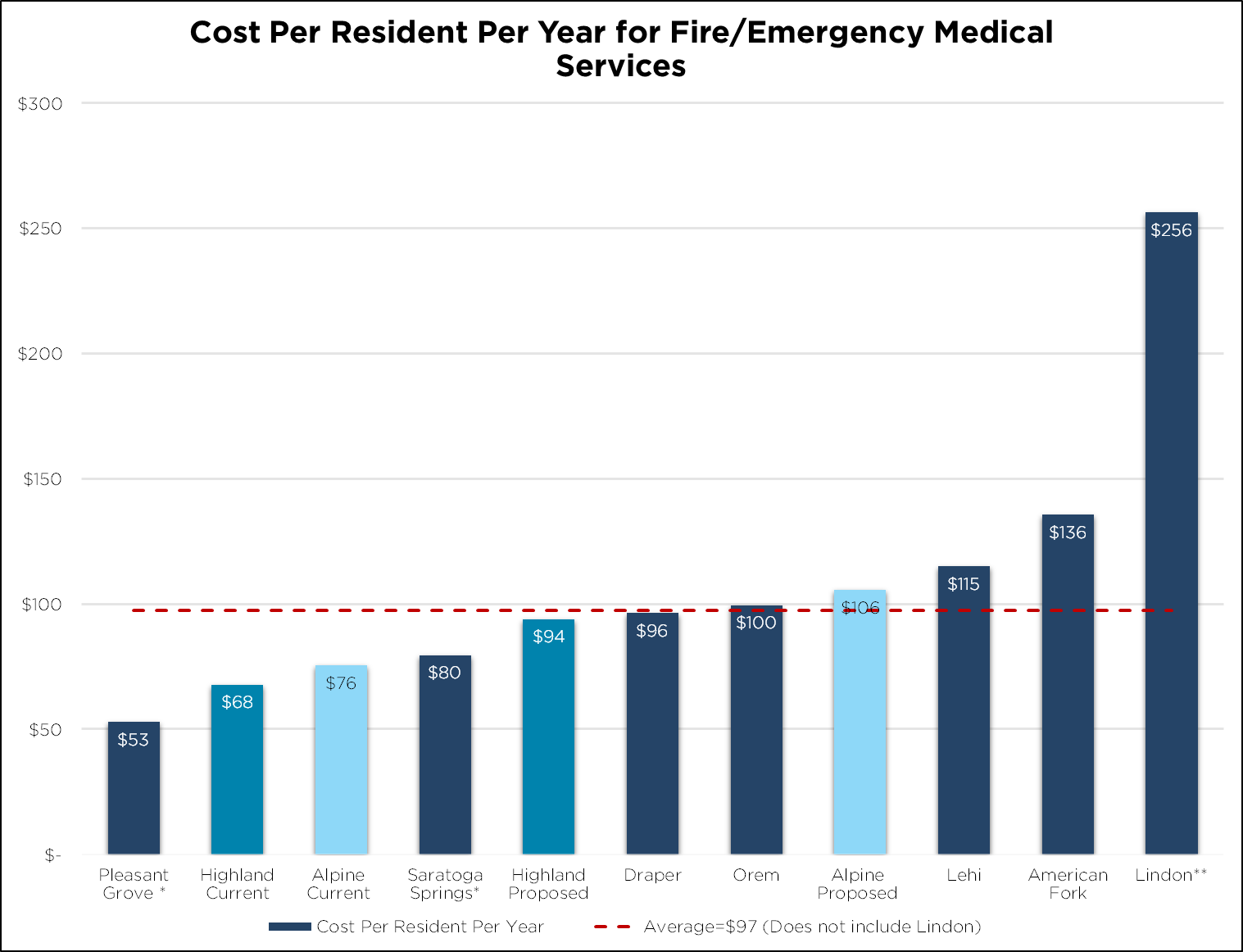 Being able to attract and keep quality police officers is vital to providing quality police services such as crime prevention and traffic enforcement which keeps Highland the happy and peaceful place that it always has been. Unfortunately, throughout the nation, including here in Highland, recruiting and retaining police officers has become more and more challenging. For example, in past years we would receive 30 or more applicants for an open police officer position. We recently had 2 open positions and only received 5 applicants.

The Utah State Legislature responded to this trend by passing a bill that requires cities to increase the retirement benefit for some of our officers. Lone Peak Police Department is also responding by raising the minimum starting wage of officers and adding a 401K matching program to be more competitive with neighboring police agencies. Even with the increase, Highland residents will be paying less per resident for police than cities such as Pleasant Grove, Saratoga Springs, Lehi, Draper, Orem, and American Fork. See the charts below for a look at how we'll compare with neighboring entities. 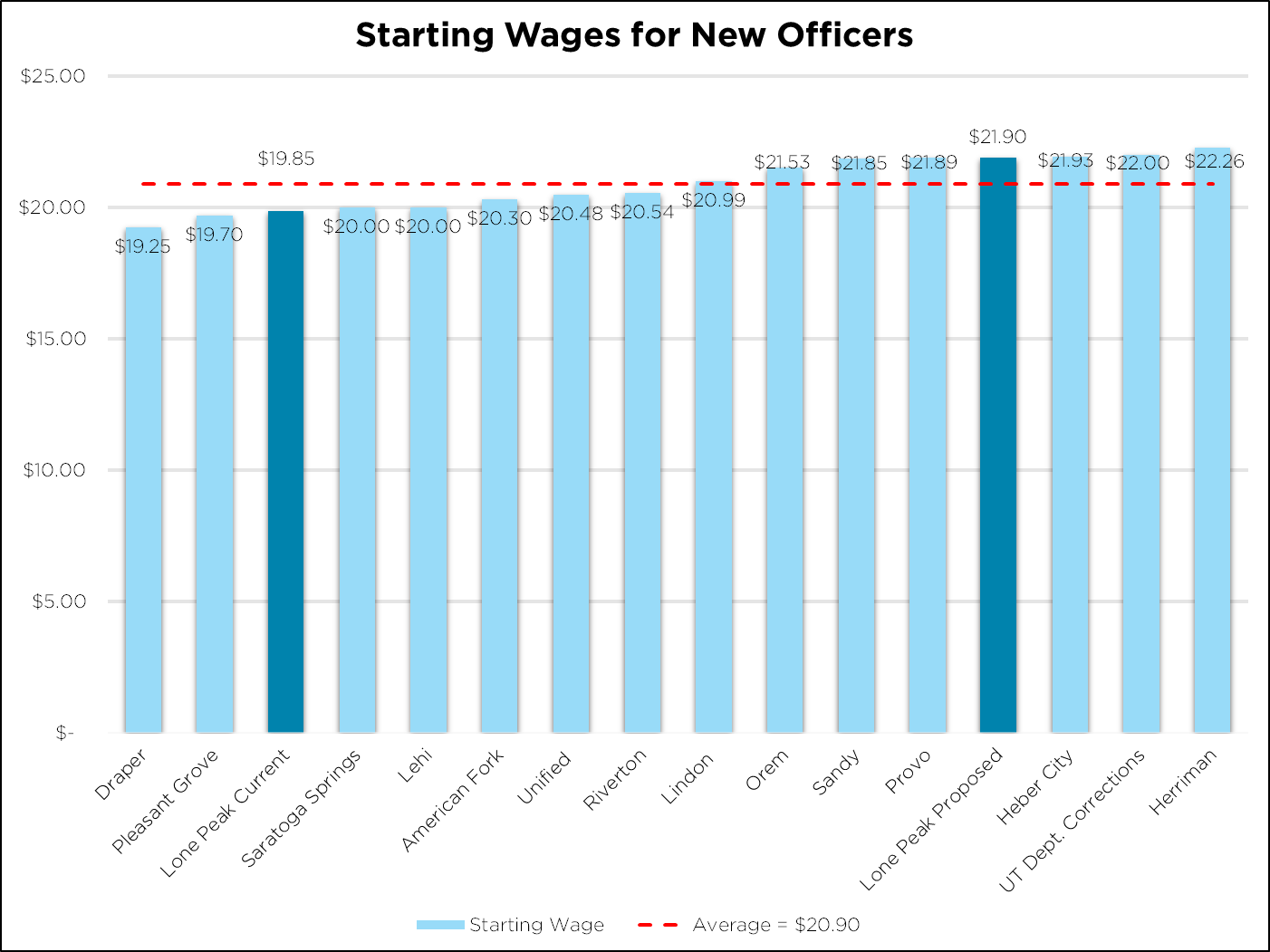 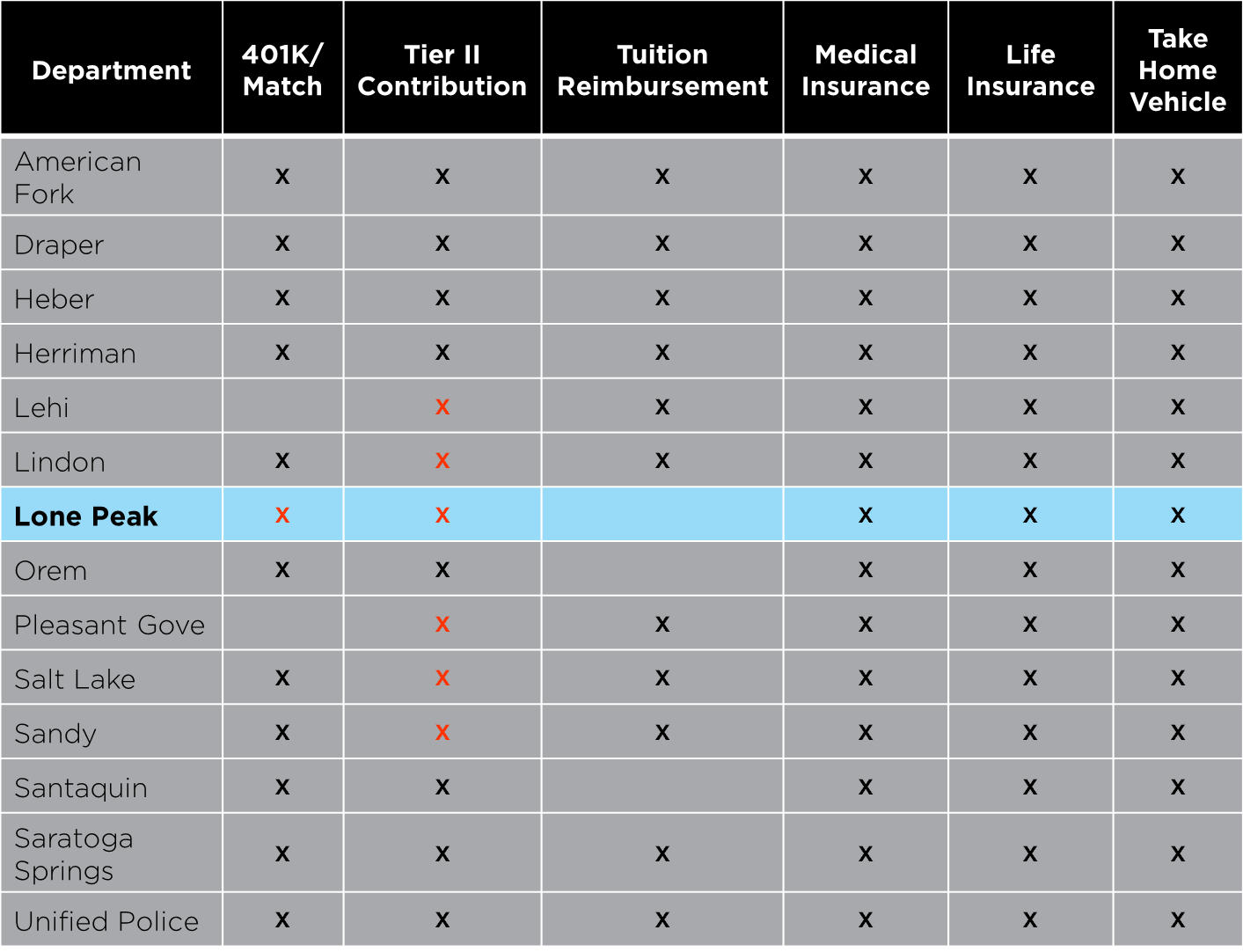 The red X's are items that are being added. 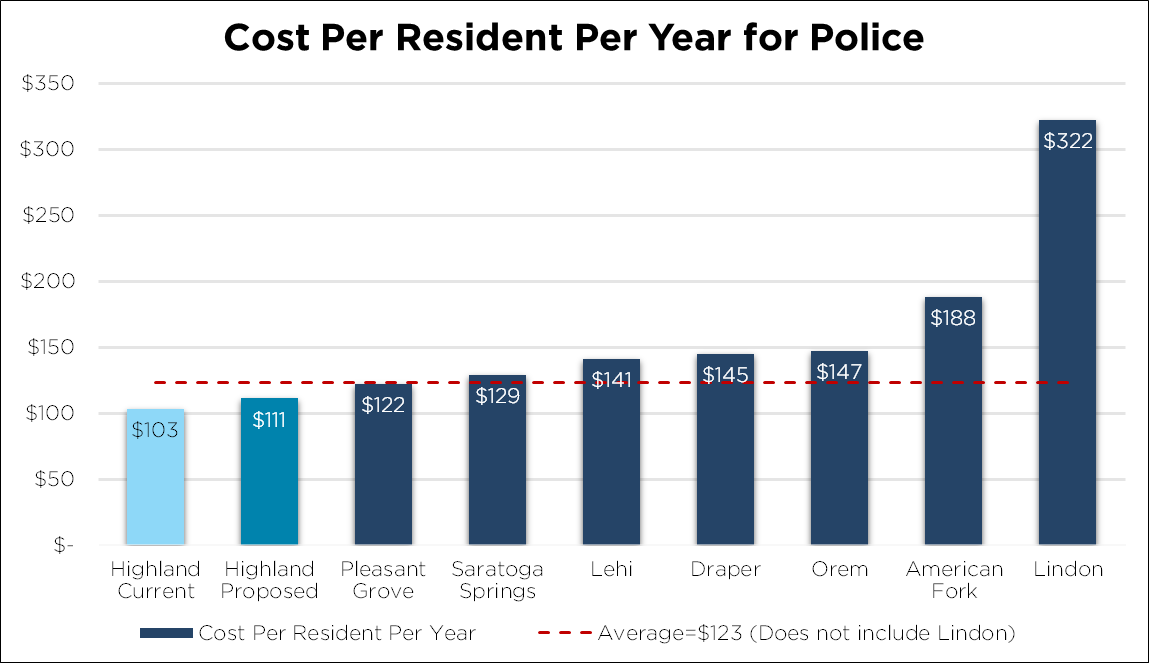 For more information, see the Police District's proposal presentation (PDF) given to the Lone Peak Public Safety Board and their Final Budget (PDF).

This increase is largely due to the reassignment of dispatch and like fees among two cities instead of three.

What other options were considered?

After taking out debt payments, amounts the City is legally contracted to pay, and expenses associated with areas that charge fees for their services such as building permitting, the City expenses remaining are $1.6 million dollars. (see chart below) To find $701,000 within that could mean a 50% cut to every department such as parks, administration, recorder, finance, etc. 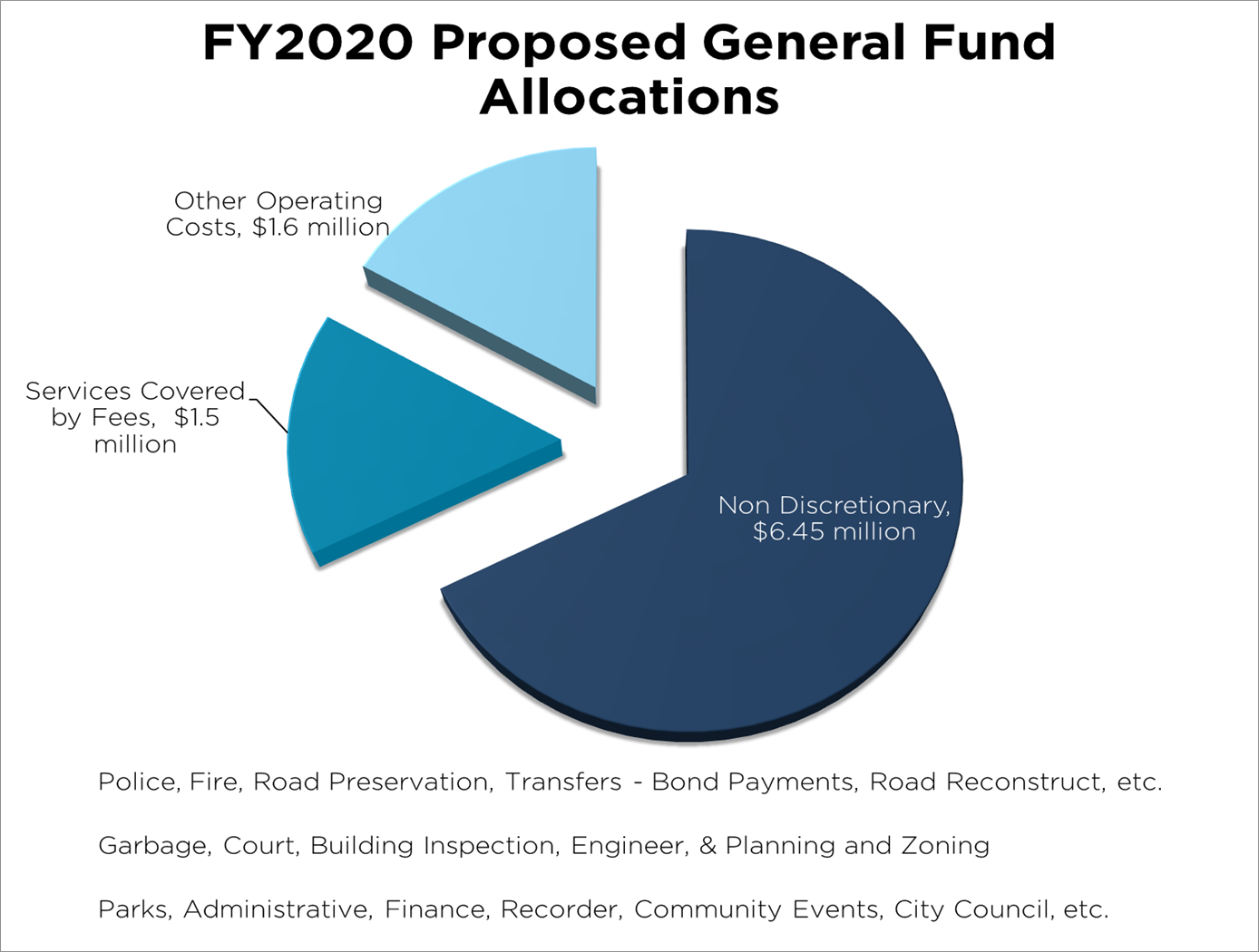 In addition, there are already several projects City Council has identified as important, but we are unable to fund (additional open space maintenance and improvements, playground replacement, the cemetery fence, a General Plan update, and replacement of park maintenance equipment).

Further, the City has been frugal with it's budget. Over the past 10 years, while our City's population has increased more than 30%, our inflation adjusted expenses have actually gone down. See the following chart for more information. 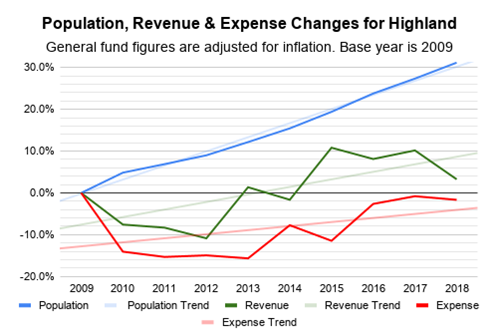 Not funding the request would have resulted in a decreased level of service for public safety functions. For example, the Fire District would not have been able to respond to or treat two medical patients at one time without using mutual aid. As we have this level of service now for the two cities, not funding the request would mean a decrease in the current level service and likely an increase response times when multiple incidents occur.

For the Police District, it would have meant their challenges in recruiting and retaining officers would have been enhanced which could have lead to a lesser quality of police traffic enforcement and crime prevention.