Libraries have the power to change lives.  Following are stories of real Highland City Library patrons and how the Library has impacted their lives. 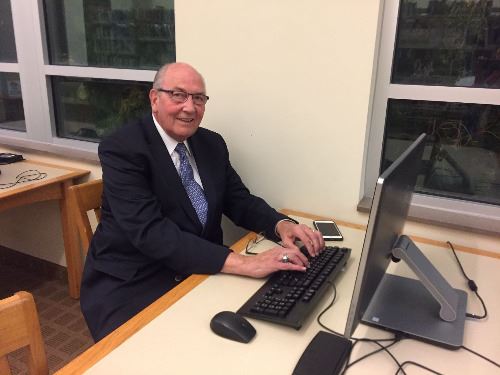 Lowell Nelson has always been involved in community service. He has lived in the Highland/Lehi area since 1977, and he and his wife raised their seven children here. From 1986 to 1990, Lowell was on the Highland City Council, and he then served in the Utah State Legislature from 1992 to 2000. He encouraged a multitude of scouts to achieve the Eagle Scout award, and he was given the BSA Silver Beaver award.

In recent years, Lowell Nelson has become a familiar face at the Highland City Library. Typically he comes there three times a week to study, write, and work. Often you will find him writing to dozens of missionaries, sending them the current news from our area and encouraging them in their work. At other times he will be conducting business, doing work for his financial planning company. Some days he is scanning and printing family history material. The library provides him with the space and equipment he needs.

The library has become a haven for Lowell, and he notices and appreciates the smallest details. He feels warmth from the smiling faces of the staff, the concern he sees as they plan learning opportunities for children, and the consideration they give to each patron.

Probably few patrons notice the careful care given books when they are returned, making sure they come back in the same condition as they went out.  Lowell observes how they are carefully checked for marks, wiped down with cleansing cloths, and then placed back on the shelves.

Lowell enjoys the quiet of the library, but he also likes the noise of children when they come for library-sponsored activities. He says, “The Highland Library is a place of learning for the upcoming generations, and the staff puts a lot of preparation into making these events memorable and exciting!” The children can be noisy, but they’re never disruptive.

Lowell watches as the library welcomes those with mental disabilities to the library each week and gives them opportunities to be taught in simple and loving ways. He observes that the library staff takes their needs seriously, plans special programs for them, and allows them to sit in the City Council Chamber, which gives them a sense of importance.

Lowell Nelson treasures the organization of the library. He says, “As I have walked through the book stacks and looked at the different titles, it becomes very clear that every book is in its correct place. There is order and nothing is misplaced. This is a wonderful library!”

The Library welcomes between 4000-5000 visitors each month.

Libraries have something for everyone.

Diana Elder has always loved reading, learning, and libraries. When Highland City built its very own library, she was thrilled. She belongs to two book clubs and over the years has been happy to find that most of the books she needed were available either in house or through the inter-library loan program. Diana says, “That program has been a wonderful resource not only for me personally, but also professionally.”

In 2015 Diana set a goal to become an Accredited Genealogist professional and needed several reference books to prepare for her testing. The books were on the history and records of her chosen region—the Gulf South United States. Through inter-library loan, she was able to order books about researching in states such as Arkansas and Texas. Those books came from libraries throughout the country and gave her the opportunity to study from the comfort of her home.

Now as a professional genealogist, Diana still uses the inter-library loan system to order reference books that she uses in her research. She and her daughter, Nicole Dyer, own Family Locket Genealogists, a professional research company. They also provide learning opportunities through their books, podcast, study groups, and eCourse, all of which can be accessed on their Website, Family Locket. They love helping others learn how to find their ancestors. Diana states, “The Highland City Library has proven to be of great benefit to me and my family.”

The Inter-library Loan service is available to all library card holders and allows patrons to access books from almost any library in the country.

Thirty-six. That's how many times Jacqueline Roettger has moved in her life, and the local library has played a crucial part in each of those moves.

It was from the local library that Jacqueline and her family learned what was happening in their new community, where they found programs for children and adults, met and made new friends during story times, and found information and learning opportunities through a host of books and movies.  In fact, a new library card was always one of Jacqueline's first acquisitions in any new area.

This was true for Jacqueline even as a child.  Because her father was a pilot, she changed locations and schools a lot, and found that the local library helped her even out her education.  If she was behind, the library helped her catch up; if she was ahead, she found challenging material to fill her time.

Eventually Jacqueline married and had five children.  She also continued to move often, and over the years she obtained many, many more library cards.  Her children became participants in many library programs.  While living in North Logan, her boys rode their bikes over three miles to attend teen nights at the library.  One of her sons was vice-president of the Teen Advisory Board.  They helped clean the library and decorate it.  They did service projects, held quiz bowls, had video game nights, and played putt putt golf between the stacks.

In April, 2018, the Roettger family moved to Highland, and before they even unpacked, they found our community library.  They loved the summer reading programs, came to story hour, and joined the robotics club.  Today, Charlotte, age 8, especially loves the arts and crafts projects the library provides.   Alex, who is autistic, enjoys reading in the alcove where he can pursue a single topic over an extended period of time. Ethan, 15, enjoys his independence, exploring subjects he likes and helping his siblings do the same. They all do homework on the computers, and mom appreciates the firewalls the library has in place. Last year when the family had to make an unexpected trip to a funeral, they went straight to the library to find movies and books on CD for the long journey. It was yet another way the library has been a help to them.

The Roettger family wants to give back to the library as well, so Jacqueline recently joined the Friends of the Library where she works with others helping to keep our community library strong.  As Jacqueline says, “The library is a place of abundance and happiness. We can have any dream we want because the library is there to help us build it.”

The Library issues about 90 new library cards each month.