WHAT IS A UTILITY RATE STUDY?

About five years ago, Highland City Council and staff worked together to understand the true cost of utility services and create master plans and maintenance plans for all of our utility systems including culinary water, pressurized irrigation, sewer, and storm drain. These plans call for the maintenance and upgrading of our systems at prescribed times to ensure that the City’s utility systems are maintained and upgraded appropriately so that services continue to run smoothly for Highland residents now and in the future.

As it has been five years since the creation of these plans, for the past few months City Council has been reviewing the plans to see if any adjustments need to be made. The plan updates showed that the pressurized irrigation, sewer, and storm drain funds all have the appropriate amount of funding to keep up on the proper maintenance and capital projects. Unfortunately, the culinary water fund does not have enough revenue and completing the planned maintenance and needed upgrades to the system would mean the fund would run out of funds by 2023 without a revenue increase.

WHAT ARE SOME OF THE PROJECTS THAT ARE PLANNED?

Here are a few examples of what projects are planned for each of these utilities over the next few years.

During the update process, the City found that there is a need for a new culinary water well. As growth has occurred in Highland and surrounding areas, ground water has gone deeper and one of our wells that was first dug in 1986 is no longer is able to reach current ground water levels. Digging this well deeper will allow the City to bring this well back online and again use it to provide drinking water to the City.

As demand increases from use of the pressurized irrigation system, the City has found that there is a need to replace the pumps at our PI ponds and increase the capacity of these ponds. These replacements and expansions will better allow the City to provide PI water to residents in the summer months.

Just like any other machine constantly being used, it is nearly time to replace one of our Sewer Lift Stations. Lift stations lift the sewage from lower points in the sewer system up to the main sewer lines that travel to the sewage treatment plant. Proper functioning lift stations ensure that sewer backups into homes does not occur.

One ongoing storm drain project is roadway drain improvements. Proper maintenance and improvements to roadway drains ensures that rain and other runoff can properly flow into these drains and does not backup onto roadways, driveways, and other surfaces.

WHAT WILL THE COST BE TO RESIDENTS?

The plan updates showed that the pressurized irrigation, sewer, and storm drain funds all have the appropriate amount of funding to keep up on the proper maintenance and capital projects. As such, no increases are being considered for any of those funds. The only proposed rate increase is to the culinary water rate. The bottom line is most Highland residents can expect to see a monthly increase of $3.67 on their utility bill.

Most Highland homes use less than 6,000 gallons of culinary water per month and as such only pay the base rate for culinary water which will now be $15.91 per month. Full details on the proposed rate change are detailed below:

WHEN IS THE LAST TIME HIGHLAND RAISED RATES?

As a result of the first utility rate study in 2016, the City Council increased the rates for pressurized irrigation and storm drain. Prior to that, Highland City had not raised any utility rates since 2011.

HOW DO HIGHLAND'S RATES COMPARE TO NEIGHBORING CITIES?

As illustrated in the graph below, in comparing the Utah County cities that surround Highland, even with this proposed increase, Highland will still be the lowest rate and over $6 per month below the average monthly water bill.* 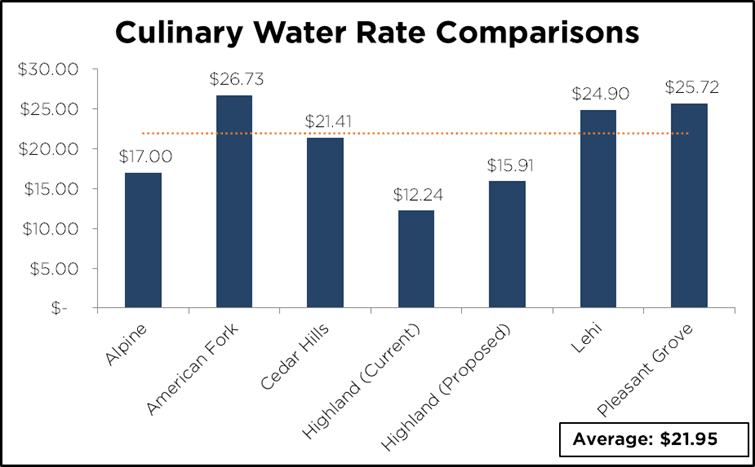 *The calculated rates assume a usage of 5,999 gallons per month.

WHAT IS THE TIMELINE?

The City Council will continue discussing this proposal at the May 18 City Council meeting. If adopted, the new culinary rate would take effect on the July utility bill.

WHERE CAN I FIND MORE INFORMATION?